After Apple Picking Themes: The poem, “After Apple Picking“, by Robert Frost is so rich in literal meanings, symbolic illustrations and contextual prospects that it demands a special investigation from readers. This is just a small effort to surface such themes in trying to interpret them both within the contextual scope as well as beyond those levels. A few important themes have been identified which render significant value in understanding the poem from a simple nature lover’s point of view to that of an advanced level reader’s and critic’s. A general analysis may also be viewed After Apple Picking Poem. 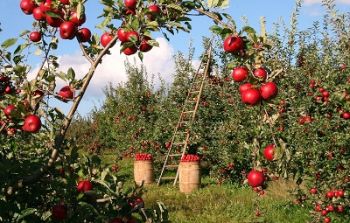 Romantic poets have unfolded such vast possibilities in delineating the peaceful, soft, loveable and motherly aspects of Nature that every poem, no matter it is romantic poetry or not, appeals to the senses if it has some relation with Nature. Since Nature has a healing impact on human mind and body; therefore, the healing influence of Nature in “After Apple Picking” cannot be ignored. We see an overtired apple picker is standing on a two pointed ladder. He is picking apples while it is getting evening and the work seems to have no end. He is “fed up with the apple picking now” but he must do his work. There comes the powerful healing influence of nature under which the overtired villager is lulled to sleep and he is “drowsing off”.

There are several hints which refer to the speculation of death. Firstly, the reference of woodchuck relates a long sleep meaning death. Secondly, the time of evening is related to either the end of day or the time of romance. Hence, the end of day may also be termed as the end of human life.

After Apple Picking Themes – Accomplishment and Relishing of success:

Accomplishment and success have been seen with interesting outlooks, here, because our dear apple picker is happy to have a plentiful crop. He would love to “relish” those “ten thousand, thousand fruits” which, unfortunately, the span of time would not let him to. Is it success to achieve or to relish and enjoy? This is an open ended question which intrigues our intellectual faculties.

After Apple Picking Themes -The very idea of success:

Sometimes it becomes very difficult to decide whether success would be in accomplishment or in letting the thing go because our poor apple picker would love to relish each fruit in hand. He does not want any fruit to “drop” outside the “cellar bin”. But he eventually surrenders for the peace of mind and body to sleep or perhaps to death. It is difficult to decide which one is success on that given occasion; to be influenced by nature or to stay overtired in excitement?

After Apple Picking Themes – Comfort versus excitement of gains:

The practical aspect of comfort versus reality of accomplishment is contrasted in the poem because the apple picker cannot have plentiful harvest if he is cosy and work shrinking but at the same time he cannot avoid comfort regardless of the fact that he is right in front of what actually desired for, a plentiful harvest.

Human psychology has been explained regarding excitement of overjoy and its related fatigue when one gets tired of what one was extremely desirous of. Fatigue also shifts the focus of human interest while is a manifestation of human fragility.

Man is a strange social animal; he tends to strive in the name of so many things that he might himself not remember. He does all this in a life which is neither certain nor easy. The role of the apple picker is to balance the ladder as well as to pick fruits. It is sufficient to let us know the difficult in balancing out i.e. survival with success; this comes too few in their life. However, life goes tragic when a sudden fall is seen or man is seen to depart from life when he had gathered so much to relish. But life becomes really joyful when somebody, especially one’s mother, in the present case nature, would soothe one’s tiredness.

Further Reading and Links for “After Apple Picking Themes